I just finished this phenomenal book. I like it because it gives such an accurate depiction of intellectual life at today’s universities. After completing my liberal arts education at The Ohio State University, I feel like I lived through the intellectual funk described in the book: the biased, secular, intellectual funk plaguing our universities. Written by Ohio native Kelly Monroe Kullburg, Finding God Beyond Harvard describes the founding of the Veritas Forum at Harvard in 1992, an organization which now serves over 50 American and international universities. Veritas hosts forums and speakers on college campuses in order “to inspire the shapers of tomorrow’s culture to connect their hardest questions with the person and story of Jesus Christ.” The book has been described as “part history, part theological meditation on the deepest level, and part thoughtful, personal reflections on the many issues facing our generation.” 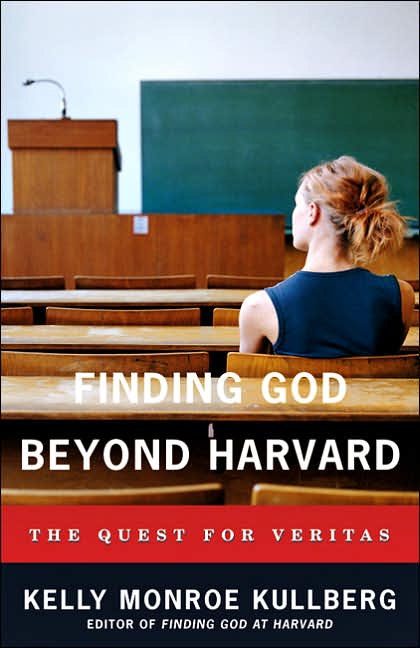 Kullberg herself graduated from The Ohio State University and continued her education at Harvard Divinity School. She surprised me with her descriptions of Harvard’s attitude toward Christianity:

“I went to Harvard Divinity School expecting to be challenged by both secular and Christian professors, students, and a broad curriculum. But by the end of an orientation lunch, I gather that one was not to speak of Jesus or the Bible without a tone of erudite cynicism.”

This was exactly my experience at Ohio State. Kullberg then exaggerates to make a point:
“The overall ethos of HDS at the time was something like this: We wear black and are tolerant of anything but belief in truth. We are sophisticated post-Christian intellectuals who understand, rather than stand under, any authority or truth claim. We are subject to no one. All things are subject to our interpretations and preferences.”
Sound familiar?

One of my favorite descriptions by Kullberg was her explanation of the real religious diversity at Harvard:
“The few evangelicals barely came out of the closet as Christians; meanwhile, the Full Moon Circle—self-defined as the “Neo-pagan, Pre-Christian, Eco-feminist Wiccan Society”—packed out the chapel when it was their turn to host weekly worship. The songs were more like chants, and some knew them by heart. Several women led the service and had choreographed a dance to beckon the “spirits of the east, west, north and south.” One professor was speaking to a spirit or an ancestor; I couldn’t tell which. Gee, I thought to myself, we’re not in Ohio anymore. I wonder when we sing “Amazing Grace” and “The Old Rugged Cross” (26).

Kullberg stays personal and describes her secular, academic family and how, despite this, she found Jesus as a high school student:
“We were among an earlier wave of the secular harvest, ourselves reduced and separated by divorce, for we reap in life what we sow as ideas” (40).

I loved Kullberg’s research about the origins of “university.” By presenting research of university mottos, crests, architecture, and early documents, Kullberg proves what American universities were originally intended for—the search for truth (veritas), found in the person of Jesus Christ. And she indicates that the problems we see on college campuses today are a result of removing Jesus as the central focus of university.
“Billy Graham asked a recent Harvard president, ‘What is the biggest problem of college students today?’ The president answered with one word: ‘emptiness.’ Unwittingly, he had offered an explanation for the rise in depression, sexual confusion, transmitted disease, drug use, binge drinking, pornography and even suicide. How did our great universities become places of emptiness? They didn’t start off that way. Harvard, Yale, Dartmouth, Princeton, Northwestern and hundreds of other colleges were founded for students to pursue a life of meaning and truth, to discover the fullness of life in Jesus Christ that we might advance his kingdom of love. Harvard’s particular vision and motto was ‘For Christ’s glory’ (In Christi gloriam) and was later changed to ‘Truth, for Christ and the church’ (Veritas: Christo et Ecclesiae). To Harvard’s original founders, truth (veritas) wasn’t an abstraction or a nice word for T-shirts and diplomas; it was a person—the Life Giver” (84). 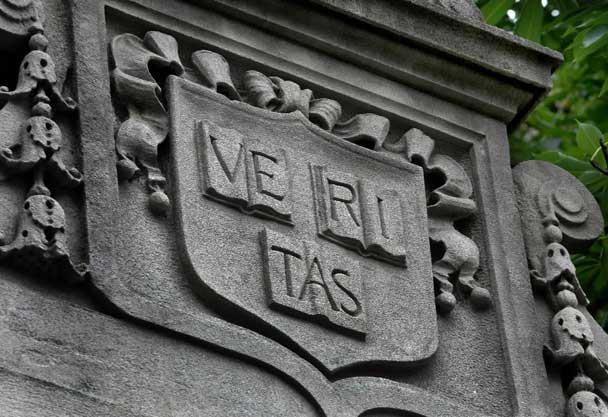 Considering the volatile reactions to Christianity in today’s college classrooms (ones I personally have sat in), it is shocking to read Harvard’s long-ago student goals:

“Let every student be earnestly pressed to consider well that the main end of his life and studies is to know God and Jesus Christ who is eternal life—John 17:3—and therefore to lay Christ in the bottom, as the only foundation of all sound knowledge and learning… seeking him for wisdom.”

But Kullberg explains the progression away from Jesus, and she states the times correctly:
“Nonetheless, the name of Jesus was eventually deleted from the motto. Today’s students are invited to a university dedicated to the pursuit of veritas, but upon arrival they often feel that no real truth is worth pursuing. As one student quipped in his commencement speech in Harvard Yard, ‘They tell us that it is heresy to suggest the superiority of some value, fantasy to believe in moral judgment sounder than your own. The freedom of our day is the freedom to devote ourselves to any values we please on the mere condition that we don’t believe them to be true’” (84). It’s creepy how right that student got it.

And Kullberg cites how secular the university’s loyalties lie. It is very telling.
“The administration just decided to fund a Harvard sex magazine but gave nothing to help Veritas—even though we have fourteen hundred students attending and are talking about love, truth and meaning” (162).

Finding God Beyond Harvard is full of history (and, frankly, cluttered with a lot of names and individuals), but what makes it work are Kullberg’s vivid accounts of tense interactions with students and faculty at countless of Veritas events. Once, Kelly had to fill in at the last minute at the University at Albany and speak at an event called “The Bible and Feminism.” With no preparation, Kelly entered as anti-Christian protestors filled the meeting hall.

“She started in on me. ‘Did some men pay you to come here? You’re being used. You are a subjugated tool of the white male hegemonic power structure, a repressed homophobic Westerner, disconnected from goddess wisdom and the rhythms of nature.’ She sounded like a women’s studies textbook. I said, ‘I’m sorry, but I think you’re a lot smarter than I am. Could you repeat that in terms I understand?’ Several students broke into laughter. ‘Some of us are in her class and we’ve been asking her that all semester,’ one said. She tried again, but when asked for her own thoughts what came across was a lot of hurt. And loneliness. She hid behind clichés and academic jargon, muttering about choice” (71).
This particularly tense Veritas event is described vividly in fifteen pages. Kullberg spent over an hour writing the audience’s complaints with Christianity on a chalkboard. Then, led by the Holy Spirit, she gave her personal testimony and shared the gospel of Jesus Christ. Some of the students had never heard about the loving person of Jesus in this way.

Veritas began to spread as a movement, and Kelly describes the vibrant community it invoked. Organizers planned countless outdoor outings for grad students. These brilliant students, soon to be world leaders, were interacting with God’s beautiful creation while working through the toughest questions of life. Kullberg describes kayaking, trail running, camping, and skiing on the East coast and surfing on the West coast.

[Obligatory Mennonite comment: there’s an appendix of photographs in the back to the book, and a photograph from USC philosopher Dallas Willard’s midnight fireside chat after his talk at Stanford features quite a few conservative Mennonites!]

While Kullberg and her shoe-string ministry to Harvard grad students seems like a tour de force, we are quickly spun into reality as she relates a devastating blow in her personal life. Ready for marriage with her long-time (7 year!) boyfriend, Kullberg finds herself alone. She gets really personal, and we watch Kelly question the God she has so faithfully served.
“It was an act of the will to advocate God’s reality when I didn’t really see his hand at work in my own life. At least not in my love life” (112).
Kullberg’s questions and doubts make her human and relatable. In her doubts and cynicism, Kelly is brought back by an intense evening… an evening so beautiful… alone with God…

“Something about it seemed too good to be false.”

And she asks the question:
“How could I enter back into God’s presence with this enchanted symphony of the creation around me? How could I trust the One behind it all? The answer came unbidden and clear: I was to choose life, to join the dance, by forgiving. Only by doing so could I enter into the abundant reality I deeply desired.”

I could go on and on about this book. (I literally made four pages of notes on this book, which I read for fun.) This book is real. While it gives a somewhat depressing image of universities today, there is unmistakable hope through its description of Veritas events, of engaged students, and of God himself. Kullberg writes,
“Overwhelmed by—if not already numbed lifeless—by images of violence and injustice, by sex apart from fidelity, and by the cynicism and confusion of their own professors, many students are asking about wisdom and even truth again. They want to know what lasts, what matters and why. Discontent, many in our culture are rebelling against the desacralized world with its appetite for abomination” (159).

This unmistakable hope is like that of the Veritas spiritual grandmother, Vera Shaw:

“Honey, the future is as bright as the promises of God.”

Students: have you ever been to a Veritas event? What was it like?

8 thoughts on “Jesus, Truth, and the University”